Good News from “Father Time” (or BY Father Time!?)

Good News from “Father Time” (or BY Father Time!?) 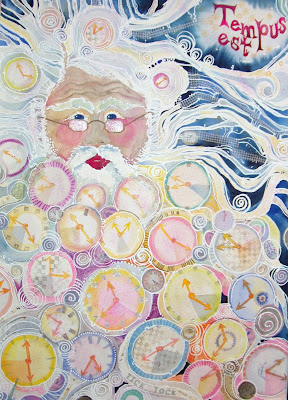 Hooray! Isn’t it interesting that just when we’re feeling most like we aren’t going to sell anything for a while, something unexpected–totally unexpected!–usually sells. 🙂 At least for me that’s the way it seems to work. I’ve had a rather quiet spell for a little while and then, out of the blue, I had a voice mail on my cell phone yesterday from Timberline Gallery in Oakhurst. When I returned the call, I was told that a small print of “Joy” had sold yesterday PLUS a full sheet watercolor of Father Time. I was so excited that I was dancing around the house for hours! I’m attaching a cropped photo of the painting that I took in rather bad lighting but you’ll get the idea of the painting from it. A lady purchased it who owns another painting of mine and I hope to get to talk to her in person very soon.