Right now, my word of the year is still in the development stages. I know what the idea is that I want to focus on this year, but I can’t put it into one word yet. First, I’d like to reflect briefly on the 2 words for last year which were
“Challenges and Collaborations”
I started 2016 off with the January Painting Challenge which I called “31 Paintings in 31 Days for $31, painting “Signs and Symbols” each day for the month of January. I didn’t sell them all but I did sell the majority of them. They made a nice, connected group and people commented on how they made unique and  personal gifts because so many of the words and images seemed a perfect match for certain people in their lives.
There were other challenges in 2016 involving taking some outside “distractions” off my plate so that I could concentrate on becoming a more successful painter and do a better job at marketing my work and promoting the gallery. I “let go” of being president of the Sanger Downtown Business Association, stopped teaching classes for children and adults (at least temporarily), and stopped facilitating Sanger Art Hop and Shop. I feel like I have a whole new life ahead of me in 2017 with more time to devote my positive energy to both creating and marketing. 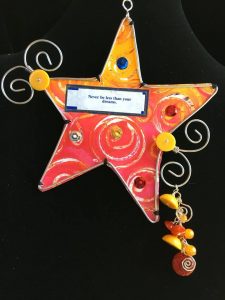 In terms of collaborations, there were many opportunities to do things with other artists. The most important collaboration swere 3 project series with Sanger artists Paul Parichan and Melanie Schow. Paul made wire shapes, I gave them backgrounds and words, and Melanie embellished them with beads and wirework. We did 3 collaborations: a heart series of seven in February, a star series of 7 in June, and a tree series of 15 in December. At this time, we have exactly ONE available star remaining. The series were very successful and we will continue the project in 2017 with 2 new series coming out in May and December. Watch for them!

In 2017, my goal is to try to paint for some venues and shows that I

haven’t participated in regularly in the past. I started off the year by
entering the “Black and White” show at Chris Sorensen’s Studio and

followed that with an entry in the “Squeeze Me” show at the same location. I am going to try to enter all the shows there this year.

As a member of the Madera County Arts Council, I participate in a number of “theme shows” at Circle Gallery each year. The first one of the year (January-February) was “Journeys” and the one coming up in March will be “Reflections”. The year will continue with 2 month shows with different themes, culminating in the Celebrate Agriculture show in October/November and perhaps a miniature show in December. So, I must be thinking ahead and painting ahead to have new work ready for each of these events. Sometimes I have a painting that works for a theme without painting a new one, but that seldom is the case. I also like to submit more than 1 when I can so that different people are always seeing several examples of my newest work at various locations. Another factor to consider this year is that I’m making a change from doing mostly watercolors to doing mostly acrylics. I don’t have a lot of acrylics in my “inventory” and need to be painting new ones all the time. 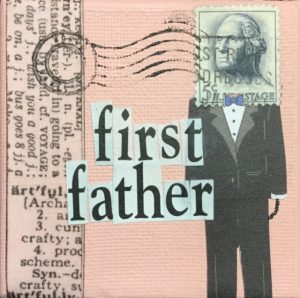 For the 30 paintings done in January 2017, I decided to incorporate postage stamps or stamping of some kind into each of them. Only 3″ X 3″ and 6″ X 6″, the challenge was doable and fun and people have been giving me stamps so I can continue the project. The “stamp idea” came about because Kate Jackson of Merced and I decided to both do the project with stamps and to have a joint show or shows together later in 2017 or early 2018, or both. All of the work in the show will have stamps or stamping in it and these small paintings will be nice affordable additions to the show. 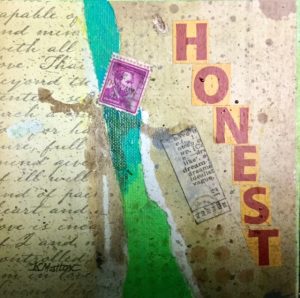 All of this leads up to my idea or thought or word(s) for 2017. I started out thinking that the word might be “Connectivity”–the state of being connected. It seems important to connect all of these disparate events and activities in some way so that I can be building inventory for the shows with Kate, producing new acrylics, and painting thematically. It seems apparent that the connecting factors are acrylic paints, gallery wrapped canvases, and stamps or stamping in all of them. This way, I can use them throughout the year as entries for various shows and still be building inventory for the joint “Featured Artist” show at the Fresno Art Hub in September/October 2017.

Soon, the idea of “Connectivity” morphed into “Congruence”, the state of agreeing or corresponding and then into “Integration” which is defined as an act or instance of combining into an integral whole. I know that there’s a word in the back of my mind that better describes this state, but it has yet to come forward. I’m sure that it will soon, but, for now, my word for 2017 will be “Integration” and will involve concentrating my efforts on developing a body of acrylic work on canvas that all uses stamps or stamping.
Kathleen Mattox2018-11-20T21:47:25-08:00"30 Paintings in 30 Days" Challenge, challenges, Chris Sorensen Studio, Circle Gallery, Collaborations, integration, Madera Arts Council, Melanie Schow, Paul Parichan, postage stamps, stamping, stamps|