Be Patient (A Short Story)

Be Patient (A Short Story)

Once upon a time, there was a sweet puppy named Artie. When he was very tiny, he liked his toys but he wasn’t crazy for them and he never had a real favorite that he couldn’t be without. As he grew older, he totally lost interest in his toys and for over four years had no interest in them at all. He loved his food treats, but playing tug or playing with toys was never of interest to him. He was food motivated, not toy-driven, to learn tricks or obedience commands. His owners thought it strange for a young dog of such a playful, fun-loving breed to show such disinterest in toys.

They were amazed that as he passed his fourth birthday, all of a sudden he was showing mild interest in certain toys and then even starting to carry them around and, then, to play with them wildly.

Why am I sharing this story with you? Because we’ve all heard that you “can’t teach an old dog new tricks” and most of us tend to believe that statement. I think we may not be able to teach older dogs as easily but sometimes they “teach themselves” or perhaps, and more likely,  finally reach the state of readiness during which they appear to learn to do new things all by themselves. Maybe for Artie, it was because he wasn’t getting his usual chew treats because they seemed to be upsetting his stomach so he turned to something else to satisfy himself.

Once upon a time there was an artist named Kathleen. Kathleen loved nothing better than to paint and experiment with new techniques and materials. One year, she found herself unmotivated to paint and turned to sewing instead. As the long and strangely unproductive year appeared to play itself out so to speak, she found herself satisfied with and intrigued by her new interest but longing to return to painting again.

For both Artie and Kathleen, perhaps it was a case of “Good things come to those who wait.” Artie may continue his newfound love of toys, and Kathleen may continue her love of sewing and designing with fabric as well as resuming her old favorite painting practices. We must allow pets and people to develop and mature at their own rates of speed and learn things on their own, when 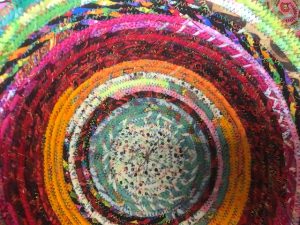 and they are ready. 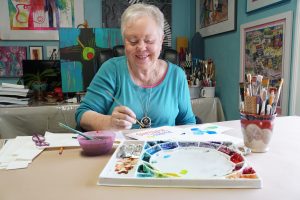